Fashion Faux Pas for the 30-Something: My Little Pony 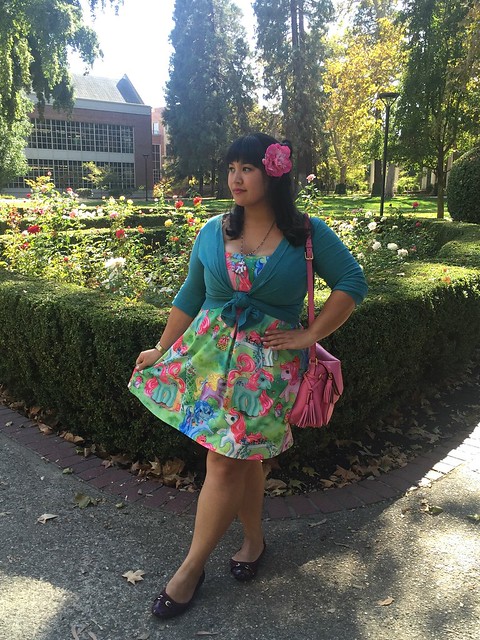 photos of author by Jennifer Khut

Anyone who ever said that My Little Pony is the lamest toy to ever exist because all you can do with them is brush and braid their hair clearly has no sense of creativity or imagination whatsoever. You know what I did with mine when I was a wee filly? I’d take a rubber band and carefully secure one of my smaller dolls onto one, then place it on top of my sister’s Fischer Price record player, flip the on switch, and VOILA: instant dolly carousel. See? You can do so much more than braid their hair.

Is it obvious that My Little Pony was my jam as a kid? I was all for anything equine related – carousels, horses, unicorns, Disney princes that had a horse (‘sup, Prince Phillip?). ALL THE HORSES! ALL THE PONYS! ALL THE TIME!

Today, My Little Pony is just as popular as ever thanks to the reboot My Little Pony: Friendship is Magic, which premiered back in 2010. I was extremely reluctant to give into it at first. I thought, “Why do they look like the product of a drunken night of passion between Denver the Last Dinosaur and a pony?! Why are they so stylized? Why? Just WHY?!” But curiosity got the best of me one day, especially since I had heard that grown ass men were loving it (they’re called “bronies” by the way), so I ended up watching an episode and found myself enjoying it way more than my nieces. Needless to say, my love for the franchise is still going strong, even at the age of 29.

You can only imagine how peeved I was to find another article on Rant Chic listing 30 things that women over 30 shouldn’t own, because I still own half the crap on that list, and among them was My Little Pony in the number 2 spot! — dramatic eye roll —

[RELATED POST:Fashion Faux Pas for the 30-Something: The Graphic T-Shirt] 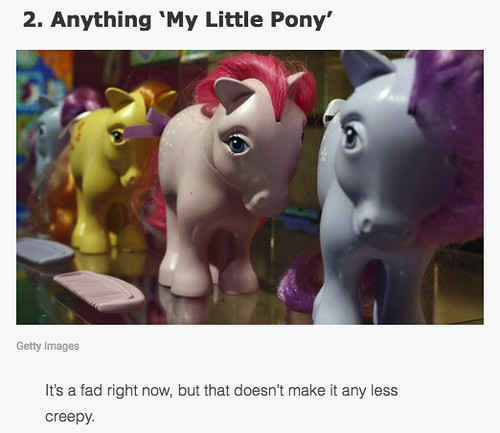 I still have a few ponys I received as a child, and one of Rarity figure (the fashionista unicorn from Friendship is Magic) that my best friend gifted me on my 29th birthday. And I flipped the hell out when I spotted this My Little Pony dress at Hot Topic a couple years ago. How could I NOT get it?! It’s too cute and so much fun! Whenever I wear it, I’m showered with all kinds of compliments – both from adults and children. One time I heard a little girl from afar exclaim to her mother, “Oh! That lady’s dress is so pretty.” And then all of a sudden I felt a tap on my arm and the little girl looked up at me and said, “I love your dress!” ☺

I will not be getting rid of this dress or any of my other pony swag just because some people may consider it to be a “little girl thing” or because it’s too “juvenile” for a grown woman to wear. You may have noticed the things that many of us loved as kids in the 80s/90s are making all kinds of comebacks. Some have been pretty terrible (see: Michael Bay’s Transformers films and the trailer for the new Jem movie – OH MY GOD, so outrageous), but others have been fantastic! The fact of the matter is, this generation of adults are very much into nostalgia. It’s showing in the forms of entertainment that’s coming out, along with fashion choices that are being made available. Dresses like my My Little Pony one, graphic tees, and all other sorts of accessories featuring our childhood favorites aren’t going anywhere any time soon, so haters can go on and be boring while myself and other geeky fashionistas play dress-up with our ponies. 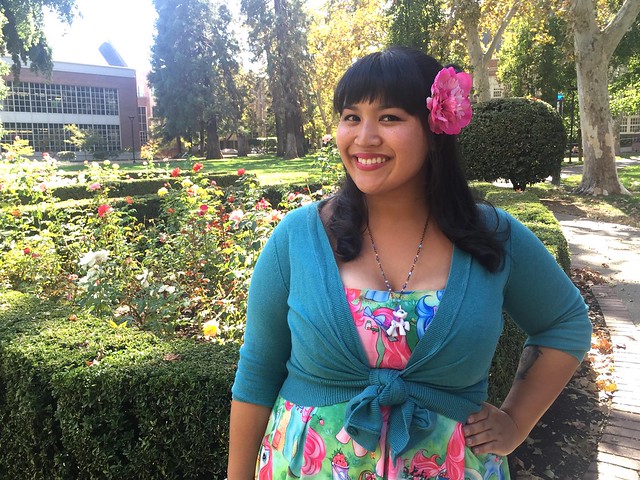 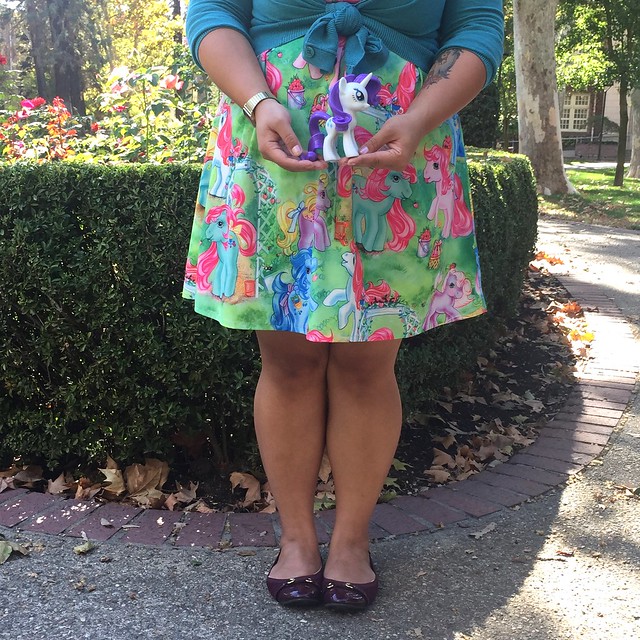 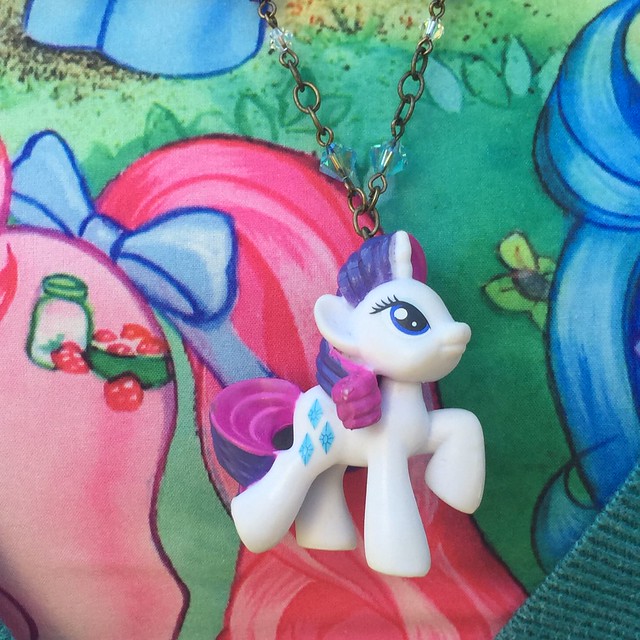 I upcycled a My Little Pony figure and turned it into a necklace. 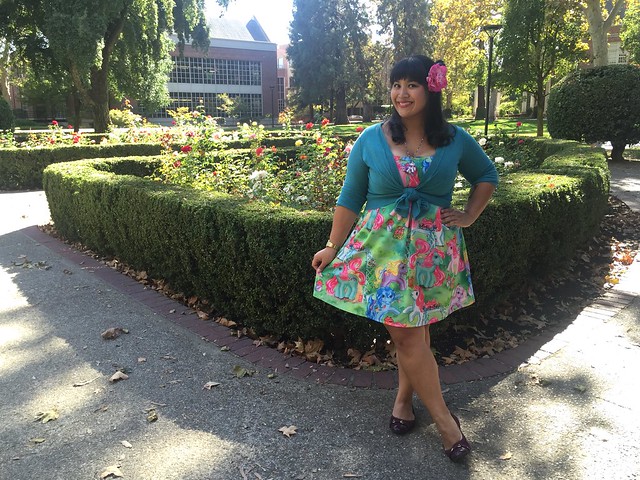 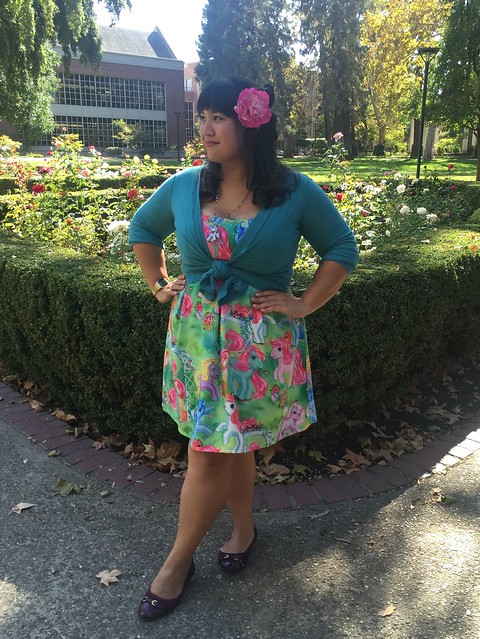 previous post
‘I Am Here’ Project Aims to Leverage The Voices of Women Around the World
next post
Dear Virgie: “I’m Fat & Only Attracted to Thin People”